If you were at my soccer game on Tuesday, August 2nd you probably heard me scream like a girl. No offense to girls, there's no doubt they're tougher than I am, they do however have higher pitched voices, and that's what I sounded like.

Here's what (I think) happened:

So after at least several minutes of writhing around on the ground Rory and Andrew carried/dragged me to my truck where Andrew took me to the Foothills Hospital.

By the time we arrived there my arms and shoulders were numb. I thought this was from my awkward cross vehicle sitting position, but by the time I got to the admin desk my hands were completely numb and my hands were cramped up like claws and I couldn't move them. That was scary as I had no idea what was causing it. I hurt my ankle, about as far away from your hands as you can get.

The admin nurse said I was hyperventilating and to relax and slow my breating. I didn't even realize I was breathing fast. So I pretended I was scuba diving and took measured breathes and within a few minutes my extremities were back to normal.

Unfortunately I felt nauseous and I'm sure I looked like hell too. My ankle really hurt.

So I got bumped up (I think) and got into the secondary waiting room where… I waited. So I finally got into x-ray where they now have a funky digital xray machine. Much more advanced than the time I was in that room a few years earlier after a motorcycle vs wall misunderstanding. But that's a story for another time.

So after more waiting the doctor said it wasn't broken just sprained. This was a good thing as I'm going to Winnipeg on Friday and a 10 day road trip in two weeks. A cast would be a major downer and probably reason enough to cancel the road trip.

So now (the next day) I can sort of limp around dragging my leg like Quazy Modo.

Oh yeah, I saved the shot. 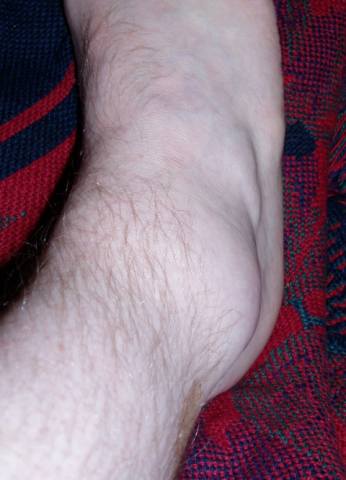 Ironically the bruise doesn't hurt at all. The puffiness higher up is mighty tender though. 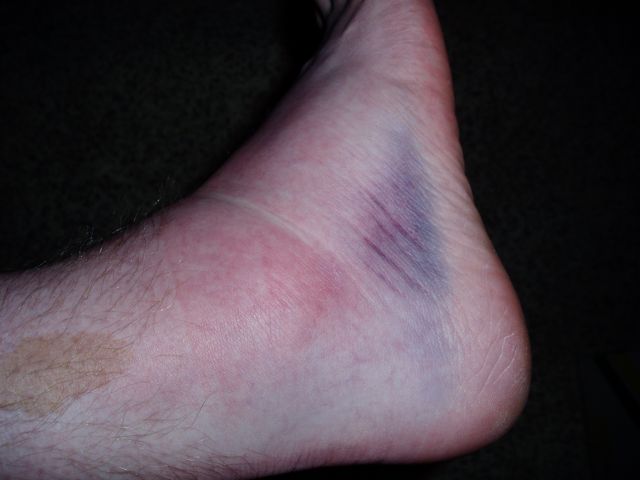