The Ballad of Glenmore Reservoir

🎼 Just sit right back and you'll hear a tale…

I bought a used Kolibri 2-12 sailing dingy and was keen to try it out. My boat is a 12' long sloop. It has a jib (the small sail up front) and the main sail.

I practiced rigging in my backyard but couldn't get the sails up for long as it was always too breezy. A few things that I didn't like was how the topping lift attached to the boom (just a simple hook) and that the outhaul didn't seat in the jam cleat very well. 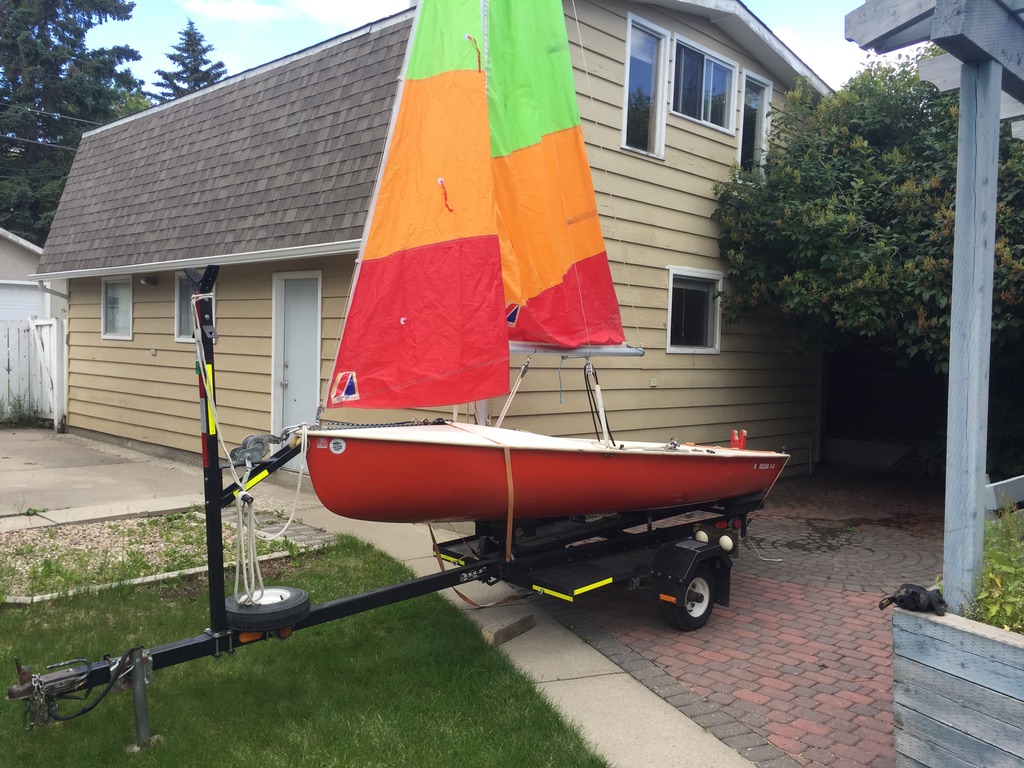 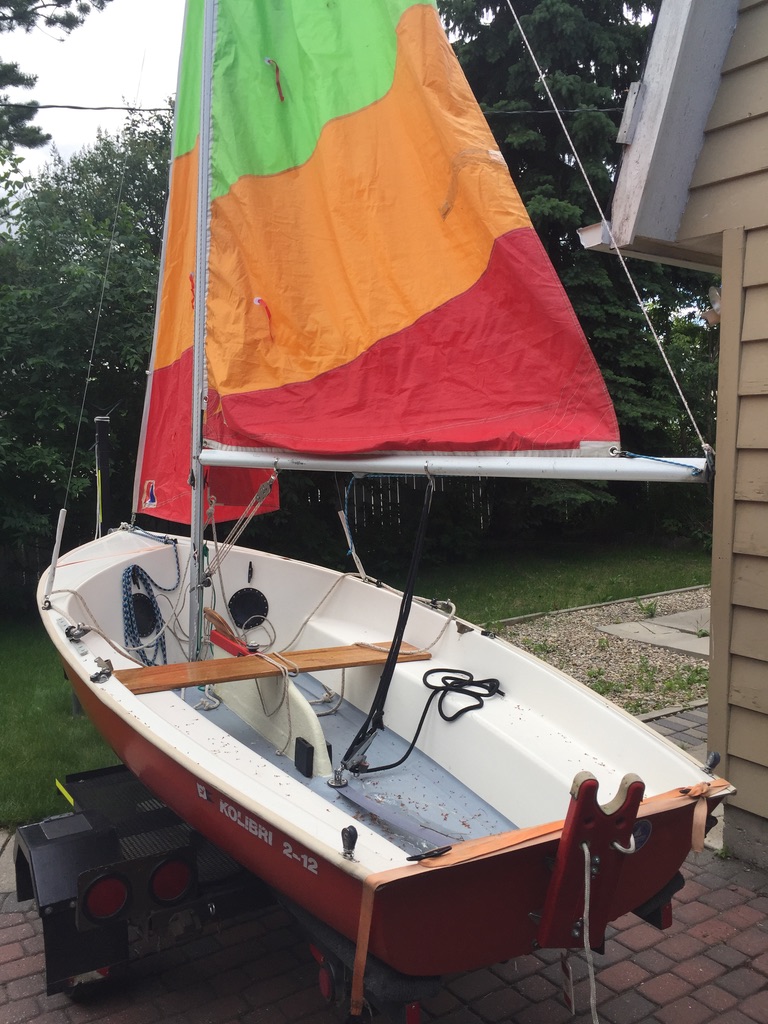 My buddy Mitch met me at Glenmore reservoir and we finished rigging the boat.

After a few false starts getting the boat launched (I can back up a trailer even less than I can sail) my boat was finally floating!

Right after getting into the boat the wind speed had probably doubled. By the time we drifted off the dock I knew I was in over my head and tried to turn around.

Leaving the dock was mistake #1.

How we left the dock was mistake #2. The boat was pointed into the wind and being pushed into the dock so when the dock ran out the boat immediately swung around and the loose sails still caught a lot of air.

I never even got the chance to get settled and poor Mitch was doing his best to keep everything level but it was his first time in a sailboat. My pre-launch instructions turned out to be inadequate and that was probably mistake #½.

That would have been fine as the sail itself could have held up the boom but the outhaul also let loose so the main sail basically ran forward and turned into a giant wind sock against the mast.

It was around this point Mitch recalls hearing a lot of uh ohs and oh shit from behind him. Mitch was Johny on the spot keeping the boat upright.

I had no steerage as we weren't moving foward, the boom was more or less in my lap and pinning me to the port side of the boat. The flapping sails were making a lot of noise. I was getting wet crouched on the deck as we took on some water when we almost capsized.

I was still trying to figure out if I could get the a main sail sorted by getting pointed into the wind, holding the boom up while Mitch yanked on the outhaul when Mitch sorta asked “should we drop the sails?”

Yeah. Yeah we should probably drop some sail.

It was kinda funny, I was trapped port side by the boom, hoping we don't turn left so that I don't end up over balancing the boat, all the while trying to explain to Mitch what to do, while simultaneously reefing back and forth on the rudder trying to keep things under control. I think I was also working the jib trying to gain some semblance of control.

By this point we weren't by the dock anymore.

Anyhow, I tell Mitch to loosen the green halyard (ropes on boats aren't called ropes) and pull down the sail. First part was easy but then he's all like “now what rope do I pull on?” and I'm all like “grab the fucking sail and yank on it!”. “Oh yeah, that makes sense.”

So now that the main was down things were significantly calmer. Not what you'd call good, but calmer.

The next problem was that we had to do something with the boom so I could move. While Mitch disconnected the gooseneck and boom vang I worked on the main sheet. Undoing a pin/ring combination one handed while working the rudder is about a tricky as it sounds. Anyhow, once everything got disconnected we could move the boom enough to get it stowed under the thwart (boat talk for front bench).

So now things were bordering on “less worse”. By this point we were kinda in the middle of the lake.

It wasn't actually three hours. By now we've been “sailing” for about 15 minutes. Maybe only 10, time really flies when your anus is puckered that much.

So I aimed for a bit of a bay so we could get our bearing and figure out what to do. Options were try to sail back to the dock, bust out the oars and try to row against the wind, or sail downwind to the other dock on the other side of the lake.

The logistics of getting the oars setup and trying to row against the wind seemed a bit daunting so I figured I'd try to sail back, we could always try rowing later.

It's worth noting that another boat was flailing out on the lake pretty bad as well. They had one sail, then two, then I think they got caught up on something because they were waving but it didn't look like they were drifting. Sorry guys, I had my own problems.

So after trying to make headway upwind and probably losing ground we decided to go to the other dock. It always seems calmer when going downwind since the apparent wind is lower but I do think it was calmer. If the wind speed had been like that when we launched I probably could have got organized and held everything together even when the wind picked up later.

Anyhow, on the other side of the lake, about 50' from the second dock the wind starting howling and we came in pretty hot but I was able to bleed off some speed and actually made a nice docking all things considered.

By the time we got the jib down it was windy as hell. Like, I would not have considered leaving the dock at all in that much wind.

If you can walk away from a landing, it's a good landing. If you use the airplane the next day, it's an outstanding landing. - Chuck Yeager

Jesus Christ that was exciting. - Me

So if any future crew is reading this know that I want to have fun sails, not exciting sails. I feel like I've grown as a sailor and as a person… narrator: definitely the first one…